Half English/Norwegian Krissy Matthews was born 25th May 1992, and now at the rare age of 17, has already managed to do a lot of things a normal young teenager wouldn’t. Krissy’s father, Keith Matthews first got him up on stage at the age of three, but Krissy got his first electric guitar at the age of eight, and from then on it was an upwards spiral. It all started in August 2004, when Krissy sat in with John Mayall and the BluesBreakers in the Notodden Blues Festival, Norway. He played two nights running, and from that, Krissy had national radio and press interviews and sat in with several top Norwegian acts. Krissy went back in October 2004, where he appeared on “God Morgen Norge”, Norway’s national breakfast TV, did a radio session with Knut Reiersrud for “BluesAsylet” on NRK P2, and performed live on stage with Larry Burton (Albert Collins, John Lee Hooker, Albert King) in the club “Muddy Waters”, centre of Oslo. 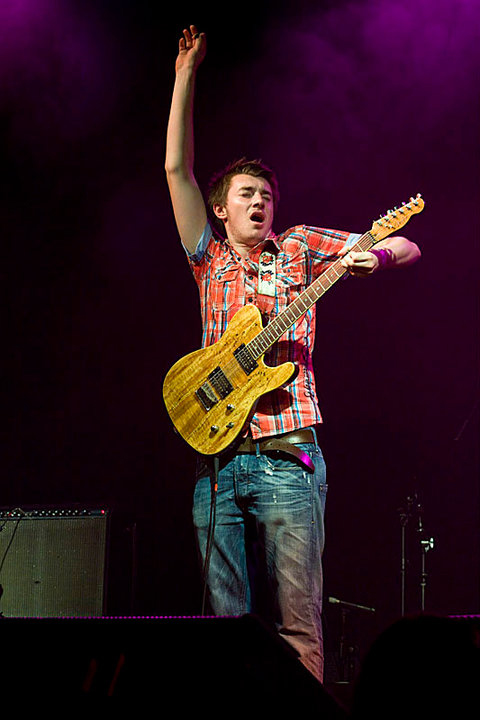 When Krissy got back to the UK, he started his first band Krissy’s Blues Boys. This was a four piece, with the extra guitar added by Keith Matthews. The band did several pub gigs to get the name around, with the odd festival, and an appearance by Bernie Marsden (Whitesnake) sitting in at one of them. Krissy continued to build his name up locally. Then about a year later, Keith Matthews went onto bass, forming a 3 piece power blues trio, and this was the line up to stay. The band used different drummers, but in July 2005, went onto record their first CD “Influences” in Timeless Studios with Mark Freeman on Drums and Keith Matthews on Bass. This was to be sold just at gigs, but then in February 2006, Krissy signed to Via Music in Norway, and the CD was released in Scandinavia. April 2006, Krissy went over to Norway for a press weekend to promote the CD. This included “God Morgen Norge” again and several radio and newspaper interviews such as “Dagbladet”, “Vaart Land” and “Aftenposten”. Since then, the band have developed, had reviews in several magazines and newspapers, including a 7 page feature of Krissy and the band in the British national magazine “Blues Matters. February 2007, they went off to Norway to record the second CD “No Age Limit”, in Juke Joint Studios, Notodden. This was followed up by their first trip to France in March the same year, where they performed the Blues Autour Du Zinc festival” and received great responses. 2 months later, Krissy was invited up by Jeff Healey to perform live on stage with him, which sadly turned out to be his last ever two songs performed live in the U.K.

The CD was released in August 2007, and to celebrate that, the band did a 15 date tour of Scandinavia, which included playing Rockefeller, Oslo supporting Walter Trout, and going off for two nights in the Mojo Blues Bar, Copenhagen. That same year, the band also went of to Europe in October, to celebrate the release. This included 3 shows supporting Robben Ford, as well as 4 club dates in and around Belgium and Holland, with a support slot for Walter Trout in the U.K, where Krissy got up and jammed with him. April 2008, the band went off for their second tour of Europe, where they performed 15 shows in 15 days. Since then the band did a week’s tour of Norway in May and September 2008 and a 20 date tour of Europe in October/November, as well as numerous gigs across the UK, performing festivals and receiving great reviews. The next CD “Allen in Reverse” was recorded in January 2009, and was released in September 2009. It is receiving good reviews across Europe, and plenty of plays in Europe. July 2009, Krissy got a phone call from Marshall Amplification to come and perform for the Marshall Class 5 Launch Party at Ronnie Scotts supporting Joe Bonamassa. Of course the band did the gig, and from that went onto recording for Paul Jones, and also had one of his songs on the Classic Rock Blues Compilation CD, and Total Guitar featuring him in the “Bands to watch out for” section. November 20th, the band went to record a session for BBC Radio 2 Paul Jones at BBC Maida Vale, which was aired February 2010, just before a string of UK shows. 2010 proved to be another busy year for the band. Miikey Dean Smith joined the band on the drum stool, just before the festival season started, giving the band an extra dimension, and Krissy had his first 15 date tour of Poland on his own with a polish band, as well as several other fantastic gigs in Europe. The year ended with the recording of the 4th studio CD to date “Hit the Rock” which will be released late April 2011. 2011 is shaping up to be a busy year with over 50 gigs across Europe from March – June. Krissy is definitely worth going to watch, and is building up a name as one of the brightest blues rock players coming up in Europe. The band have performed in over 12 different countries including England, Wales, Scotland, Norway, Sweden, Denmark, Poland, Holland, Belgium, Germany, France and Switzerland, and Portugal where they played the Festi Avante. Krissy performed to 15,000 people alongside Brazilian blues player Nuno Mindelis there. They got such a good reception, they got asked to come back the following year where they were upgraded as the main stage opening act.