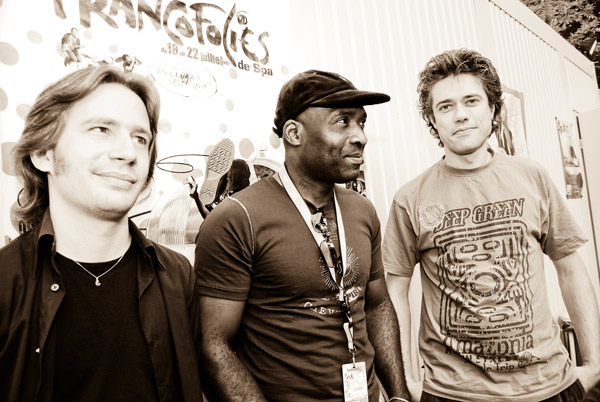 Roland Tchakounté is living proof that Blues knows no boundaries. Born in Cameroon, far away from the cotton fields that sculpted his elders’ style, he starts his musical training through percussion then the guitar, followed by the piano and harmonica. His first steps on stage, as a bass player and singer, take place within local Cameroonian band specialised in Afro-American songs’ cover (James Brown, Wilson Picket, Jimi Hendricks, etc.). He gets hooked on Blues when listening to John Lee Hooker’s Crawling Kingsnake and will have only one dream from now on : become a Bluesman. He succeeds in creating a perfect fusion between his African roots, his Blues influences and his particularity to sing his complete repertoire in Bamiléké, his native dialect. In December 1999, « Bred Bouh Shuha Blues » is released and brings him fame.  « Abango », an acoustic duo masterpiece, follows in 2005 and offers him and his partner, Mick Ravassat, the opportunity to tour the United States (Chicago, Memphis), Canada (Montreal, Mont Tremblant) and Belgium.  In 2006, he meets the drummer and percussionist Mathias Bernheim, and conquered by his playing, both very simple and out of the ordinary, instantly makes him the third member of the band.  « WAKA », his new album, is released in February 2008 and corresponds to a sold-out concert at the New Morning, in Paris (France). Then, he visits once again every corners of the world and will be on stage in Belgium, Canada, Indonesia, Vietnam, Malaysia, Lithuania, Croatia, but also in Africa (Burkina Faso, Mali) and in France (Cognac, Vaison-la-Romaine, etc.). Roland Tchakounté sees his music as a « wild melody », allowing him to address a rainbow of feelings, sad or joyful, but also express the neglected state where the African continent lies.  He obviously looks up to such artists as Sun House, Robert Johnson, Edmore James, Muddy Waters, but regards John Lee Hooker and Ali Farka Touré as his real masters. A self-proclaimed Utopian, his fundamental desire is to make the human race a one and great family, without distinctions of race or colour.