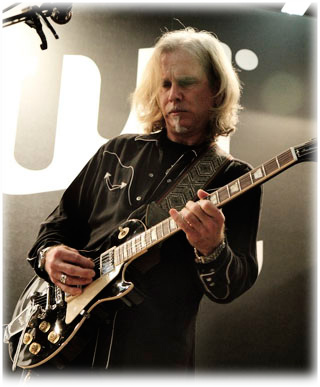 Todd began playing on the New York scene back in 1979 with his band, Troy & the Tornados performing in rooms such as the Lone Star Cafe, The Ritz, My Father’s Place, Lamour’s, The Chance, Tramps, Rodeo Bar and probably any hole in the wall in the NYC area that would book the Tornados. Todd or ‘Troy’ and company opened for a bevy of acts such as, Johnny Winter, Robin Trower, The Neville Bros., Son Seals, Dickey Betts, Omar & the Howlers, Gregg Allman, The Outlaws, Smithereens, Zebra, and his first opener back in 1980 , Albert Collins! Todd decided to head west in 1990 to write and record a demo with a then unknown backup singer named Sheryl Crow. After having that demo passed on by some major labels and not generating much interest after one show case performance, Todd decided to stay in Los Angeles to record and tour with former Textone, Carla Olson. Todd continued to record and perform with Carla and gig with his own blues trio and kept busy scoring soundtracks for the Playboy Channel. Sheryl in the meantime, had finished her first album, ‘Tuesday Night Music Club’ and needed a guitarist for her touring band which she put together in June of 1993 so, Todd came on board and remained until February of 1998.

In 1996, Todd relocated back to the NYC area and with Eric Massimino, Mike Lawrence and Crow band mate Scott Bryan founded A & M Record’s MOJOSON, a modern blend of psychedelic Rock and Blues. Since the Universal takeover of the Polygram group left new A & M acts like Mojoson in limbo, Todd elected to leave the label and dissolve Mojoson, putting his energies into Wolfe, which was born during the downtime from Sheryl Crow tours. Todd and his band, plays aggressive and daring blues tinged jam-rock reminiscent of the bands of the sixties and seventies. Now, with his newest band Todd Wolfe picks up where he left off 10 years ago with his original Bluesadelic-jamming sounds! “Borrowed Time”, Todd’s fifth album just released by Blues Leaf Records in North America and soon to be released in Europe by Hypertension Music is mostly comprised of original songs including “California” a song that Todd wrote with Sheryl Crow. Also included on the upcoming release is “Baby I’m Down” a Felix Pappalardi song from the first Leslie West album “Mountain”. Todd is joined by Leslie on guitar and vocals for the remaking of this song making it a new classic! Also joining Todd and the band on the new disc is Susan Cowsill and Mary Hawkins. Todd’s songs have been covered by a diverse range of artist such as, Deborah Coleman, Larry McCray, Faith Hill & Stevie Nicks.